‘We shall not cease from exploration. And the end of all our exploring will be to arrive where we started and know the place for the first time.’

The journey that has ended with the writing of this story began in 1991, when I found myself standing between two giant stones in Avebury stone circle, Wiltshire, UK. According to ‘The Sun and the Serpent’ (Miller & Broadhurst, 1989), this specific place, between these giant stones, was a point where the Michael and Mary energy lines came together, before flowing side-by-side, through this ancient stone circle. It was just after dawn on a misty May Day morning and, as I stood there, my hands and feet started to tingle. I wasn’t sure at first whether it was the cold morning air chilling my extremities; but no, my hands were warm in my jacket pockets and the sensation was getting stronger all the time. Looking back on it, this was my first tentative ‘dance with a dragon’. The first time I had consciously stood on an energy line and felt sensations in my body as I connected into the place. From this moment on, my interest in dowsing developed; with my body quickly becoming a dowsing instrument. 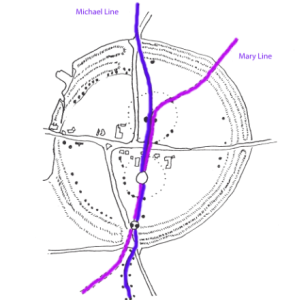 Why dragons you may ask? The answer is simple. In various ancient and modern cultures, the Dragon, the Serpent and the Worm represent the primal energy, or wild forces of Nature; the ‘chi’ or life force of the planet. Dragon stories appear in the legends of Europe and the Far East; whilst Serpents occur in both North and South America, India (Nagas) and Australia (the Rainbow Serpent); and Worms dominate the legends of Scandinavia, specifically that of ‘Midgaards Orm’, the great Worm that encircles the Earth. Or, to put it another way, the energy flow that binds the world together. Indeed, there are many texts and stories that refer to energy lines on the planet’s surface as ‘dragon lines’ (Coon, 1968), Ley lines or Lung Mei (in Chinese Feng Shui). The word ‘Ley’ was first used by Alfred Watkins to describe straight lines linking sacred places across the landscape of Southern England. He later changed the name from Leys to ancient trackways. The term ‘Ley lines’ seems to have first appeared in the 1980’s and, is often used interchangeably with energy lines. In my experience, there is a difference, as energy lines meander through a landscape, rather than flowing in straight lines. However, the term has now become so common that to try and influence its usage would be petty and a waste of time.

It was at that moment, standing between the giant stones at Avebury, that curiosity got the better of me and I wanted to understand why things were the way they were. What was this tingling feeling in my hands and feet? Why was I experiencing it now; and what was causing it? It all started as a simple idea, just a series of innocuous thoughts at first. But once the question had been asked, information and ideas flowed from various sources including videos, books, articles and many conversations with like-minded people. People who were either asking similar questions, or who had insights to questions I hadn’t yet asked.

Over time, these ideas and explorations have helped to mould a very personal view, of how seemingly diverse fields of knowledge and understanding are in fact pieces of a giant jigsaw puzzle. A puzzle, that once the pieces are fitted together, provides a clearer idea of the Earth as a total ball of energy. And so, this journey of physical and spiritual exploration that came to include many ‘dances with dragons’ began.

After being asked many times by fellow travellers ‘so what is it that you’re actually doing’; a tentative, but hopefully informative answer began to develop. ‘I was trying to understand why certain places and landscapes had been, or still are considered to be sacred; the energy flows both in, around and between them, which were discovered using dowsing techniques; the myths and legends associated with them; and the influence of the geology that either underpins them, or is part of the structures they are built with.’ The latter was important, because in the back of my mind was the growing idea that whilst it is geology that gives a landscape its shape and form; it is the minerals contained in the rocks and water flows, which contribute to the energy and spirituality of a place.

This website documents some of my adventures along the way; the observations made; the delightful and sometimes challenging experiences; and my evolving thoughts and ideas. I make no apologies for this personal perspective, or view, because it is simply that. It is of course possible to be totally wrong, but that’s OK too, because it’s been more about the journey, rather than any end goal, or definitive answer.

The material on this website is organized into two main areas: