In the early October of 1996, the eyes of the world were turned towards Iceland as the name Vatnajokull hit the headlines. In geological terms, Vatnajokull (the name means water glacier) is classified as an ice cap, although many refer to it as a glacier. Like all ice caps, it covers a very wide area equivalent to eight percent of the total landmass of Iceland; covering mountains, valleys, volcanoes and high plateaux in a blanket of ice and snow. On 29th September 1996 powerful earthquakes took place and the following day volcanic tremors were recorded. By 2nd October, it became the sight of an awesome demonstration of Nature’s power as a volcanic rift five miles long erupted under the ice, sending spectacular plumes of sulphurous steam and belching smoke up to five miles into the sky.

The ice here, in 1996, was 1,800 feet thick and the eruption was creating an underground lake of boiling water in the nearby Grimsvötn caldera. At that time, the total volume of the ice cap had been measured as at least 3,320 cubic kilometres and weighing about 3,200 billion tons. At an average rate of discharge from the underground lake, it would take the powerful Skeidara river to the south, 300 years to carry all the ice cap’s melt water to the sea – the same as 16 million oil tankers each with a capacity of 200,000 tons – or the equivalent of raising the sea level around the whole of Europe by 4 inches after the floods had settled.

This type of event has happened before in Iceland and when the underground lake reaches a certain level, the water usually forces its way slowly under the solid ice above the eastern rim of the caldera and runs into the River Skeidara at a volume of one cubic kilometre (a billion tons) and a rate of 2-5,000 cubic metres per second. The bridges and roads on Skeidarasandur to the south normally stand up quite well to the enormous weight and pressure, but Iceland now braced itself for major floods and devastation.

Thirty-eight days after the eruption began, came the long-awaited glacial burst. At its peak the flow rate was 45-50 thousand cubic metres/second and giant icebergs weighing 10-200 tons (some over 1,000 tons) lay strewn in its wake. As the water poured out of the Grimsvötn caldera, the roof of the underground channel collapsed, causing a million tons of ice to break away and a vast ice gorge to be created.

Iceland’s geographic position makes it one of the most unstable places on earth. It straddles two tectonic plates; the American and the European, which are gradually moving away from each other, giving rise to unimaginable forces deep in the Earth. As they move, molten rock is pulled to the surface, resulting in volcanic eruptions and earthquakes. At the end of 1996, my companion and I had the chance to visit this beautiful island for a few days, and we took off into the artic winter, only three hours flying time from London, knowing we were about to experience something very special. Daylight at this time of year lasts for about five hours, from 10.30am to 3.30pm, so for much of the time we were to find ourselves travelling in the dark.

During the very first morning, we became aware of images of giant ice beings, that arose from the landscape of mountains and glaciers around us, as if they had lain there sleeping. These majestic beings were to accompany us on our travels over the next three days, as we explored the south-west side of the island. It felt as if the purpose of this trip was to connect us with the spirits and energies described in the Icelandic Eddas and Sagas.

Iceland was settled by Nordic peoples in the 9th century and, tradition says the first permanent settler was Ingolfur Arnarson, a Norwegian Viking who made his home where the capital Reykjavik now stands. The Sagas were collections of Norse folk stories, written over many centuries, but compiled into their current form during the nineteenth century, which provided a history of the island and the peoples who settled there. The Eddas were the stories, written around 1220, of the Old Norse Gods they worshipped and so provide an excellent outline of Viking beliefs and mythology, for those who are interested in learning more about this fascinating subject. 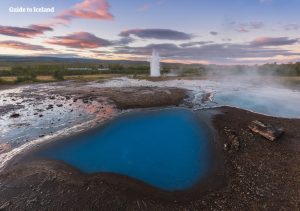 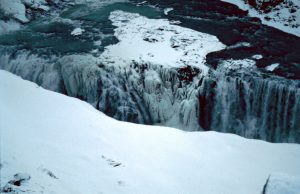 We had hoped to be able to fly over Vatnajokull, but the low-lying clouds and icy winds prevented that from happening. So, on the first day, we hired a car and headed inland, along narrow, icy, gravel roads, towards Geysir with its erupting plumes of water; and the spectacular Gullfoss (golden) Falls. Gullfoss comprises two separate waterfalls and in the winter ice and snow, they looked and felt absolutely spectacular. The upper one has a drop of 11 metres and the lower one 21 metres. Water flows over them at an average rate of 109 cubic metres a second, although in times of flood, this has risen to 2,000 cubic metres a second. The waterfalls have formed where water has followed a fissure in the lava and carved a passageway through it, before falling into a yawning canyon below.

On the second day we drove northwards along the coast road, through spectacular mountain scenery. As the snow and ice melted, we could clearly see the volcanic, almost black, cinders, lava and rocks, which cover the surface of the island. Looking north from the town of Arkanes, the light was bouncing off the mountains in the distance, giving an amazing, almost blinding show. From the map, we could clearly make out three ‘horseshoes’ of energy with a volcano in the middle, providing an anti-clockwise spiral of energy.

We then turned east and inland towards the ancient parliament place or ‘Alting’ of Pingvellir (pronounced and sometimes spelt as Thingvellir). This was the place where the original Icelandic peoples came from all over the island to settle their disputes. We had heard of the site and knew it was bound to be a major energy location, but were still completely surprised by the force of what we encountered. As we drove along, we suddenly found ourselves going over a wide, double ridge of volcanic rocks. The surge of energy was dramatic; my hair stood on end and, I felt I needed a parachute to help me come back down to Earth again. 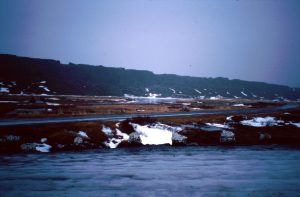 We later discovered we had actually driven over the North Atlantic Ridge, the line in the landscape where the two tectonic plates are slowly moving apart, so it was no wonder my body reacted in the way it did.

The ridge runs through a sunken valley of lava beds; a barren volcanic landscape, with mountains to the north and east, then on down through the crater lake of Pingvellir Vatn. In the summer, the ridge is easily accessible on foot, and visitors can walk along this major energy line down to the meeting place, which is in a very special, sheltered spot near the lake. The whole area is accessible from all directions, so it was not surprising the old Norsemen chose it as their parliament site.

Driving down towards the lake, we came to a small river and waterfall, which lay frozen in the volcanic rocks. At that point, we realised we had found a female energy current and the crossing point with the male energy of the rift itself. To say the effect of the site was dramatic would be an understatement, made more so by the freezing ice and snow around us. Later, as we made our way back to Reykjavík, we ‘floated’ along, as if supported by an invisible energy force, which of course we were. That evening back at the hotel, the Ice Beings gathered round, covered in a beautiful golden light. I had an immediate, initial image of them melting, but then realised the light was transforming them and bringing them alive.

On our final day, the weather cleared and we had a beautiful view of the mountains as we drove south-east towards the hot, geothermal mineral waters of the Blue Lagoon, and a warm, invigorating swim. Later that day, as we took off and flew over the mountains, I said goodbye to the Ice Beings and watched as they celebrated below. I had images of boulders flying everywhere and lots of noise, before resuming their sleeping positions in the ice-covered landscape. Iceland had been an experience I would never forget.