A Weekend in York

In September 1995, I found myself travelling northwards to York, to attend a conference organised by Fountain International, It was to be a gathering of like-minded souls, who were active in all aspects of healing, including people, animals and the Earth. Over the centuries, York has been a major centre of money, wealth, power and control; and many of us suspected that the collective presence of a large number of people, with a loving heart and intentions, could be an important factor in the clearing of any negative energies which have accumulated there.

The Romans built a fortress at York in AD71 and from there it had grown to be a key city in the north. Indeed, Constantine the Great was proclaimed emperor there in AD306, on the site that now forms part of the York Minster. Like the early settlers and the Church fathers that followed them, the Romans had obviously considered it a place of some significance too. When the Romans withdrew, the Saxons invaded; and by the 8th century, York housed possibly the greatest library north of the Alps. Throughout the Christian world, many old cathedrals and churches are built on sacred sites with a long history of worship, and York is no exception. York is described as a Minster, an Anglo-Saxon term meaning a centre of religious teaching or ministering; and during this time it also housed a basilica dedicated to the gentle wisdom of Alma Sophia. Unfortunately, the whereabouts of many of these sites were lost during Viking incursions into Northumbria, during the 9th to 11th centuries. However, more recent archaeological digs of the Anglo-Saxon areas of York have produced some fascinating insights to life during these times.

During September 1995, several individuals attending the conference, were to be involved in helping to ‘clear’ several locations in the old city, that had been witness to various battles and uprisings. Although a group trip to York Minster was arranged for early Saturday evening, a friend and I had found ourselves there earlier in the day, during lunch break. These Minsters have a chakra system, just the same as the human body and the diagram below shows the layout of these chakras. These energy points have been dowsed in many of the old churches across Britain; together with known water flows and the spirals of energy underground that occur in these locations. 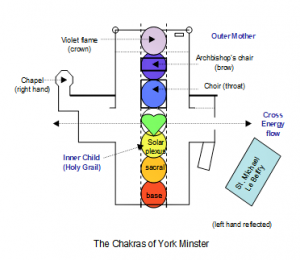 Once inside, we walked up the nave, through the first two chakras, then split to the sides until we came to the intersection with the transepts and the location of the heart chakra, where we found a rather disturbed/ruffled, cross-current of energy flowing through. Looking towards where we believed the crown chakra would be, we saw a column of light in the distance. Beyond the Archbishop’s chair, we found the column emanated from and around a violet candle, burning in a holder suspended from the ceiling high above us. Compared to the cross-flow of energies we had experienced on our walk up the Minster, this area had a very calm feel to it, almost as if we were standing in ‘the eye of a storm’.

Later that afternoon, as others made their way to the Minster, we headed off to walk along the old city walls, starting in a clockwise direction. These walls are no longer complete and so we eventually found ourselves walking off in the direction of Cliffords Tower. Cliffords Tower has existed, initially as a wooden structure, since the 11th century and has been the scene of many struggles for power and human tragedy. In 1189/1190 it had been the scene of a riot and subsequent mass suicide of 150 Jews. To those of the Jewish faith, suicide is a mortal sin and our feelings and senses told us that the clearing of this area (the local devas and elementals would not go near) was very important for the opening up of the energy flow through the city. This was later confirmed for us, when we discovered the tower is considered to be the sacral or root chakra of the city. On arrival at the base of the tower, we were guided to walk briskly round it three times in a clockwise direction. As we went round for the first time, we found ourselves walking in step against a tide of people coming the other way, almost as if we were making our way through the mob that had surrounded the tower at the time of the riot and mass suicide.

There was a very definite line of energy running from the tower towards the River Ouse, which was very noticeable as we crossed over it. Thinking about it, this was probably where the old drains (carrying the blood from the victims) had flowed underground, so it wasn’t surprising we could ‘feel’ it. By the third time round, the tide of people coming towards us had completely gone away and the overall energy around the base of the tower felt very different. 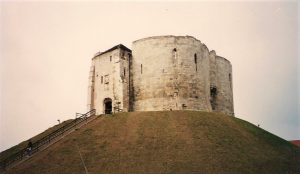 We climbed the steps to the entrance, then up the narrow spiral staircase to the top, for a breathtaking view of the city. My attention was immediately drawn to the Minster and the line of three churches which linked it to the tower. Now I understood why we had had to go to the Minster first. It was almost as if I could ‘see’ the chakra system laid out in front of me and the link-up was immediate. My companion stayed at the top of the tower, both working with and clearing the negative energies deep underground; whilst I made my way back down to the ground floor and stood in front of the entrance facing inwards, towards the middle of the tower. After a few minutes of waiting quietly, I had this distinct urge to move forward, as close as I could to the centre of the old keep. My companion later told me that as I did so, I had grounded a column of light deep underground, to replace and heal the negative energies which had just been dispersed. For me, this was a reminder of a very important lesson; we only have to trust our inner selves and we will be in the right place at the right time; even if we don’t have the ‘insight’ to see energy moving in this way, or are completely unconscious of what we are doing. As we walked away, this part of our task complete, we could sense the devas were once again dancing and singing along the ramparts.

We were very aware we had simply started things off and there would be a lot more to come. In fact, on our way back, we found ourselves walking via the three churches we had seen from the top of Clifford Tower. We later spoke to another conference member, who must have arrived at the tower just after we left. He talked of his walk around the base of the stone walls and the healing flower essences he had been guided to use there.

The following morning, I awoke with the feeling there was more to do and the word ‘drains’ in my head. In meditation, I was taken back to the tower, to clear it this time with a golden net of light and leave it with rainbow colours to continue the release and healing. I have been prompted to return there mentally, several times since, to re-enforce these colours. My companion and I left the conference around 11am and headed for the river Ouse. We hadn’t realised that September 17th was Battle of Britain Day, and as we walked into the city towards the river (water), we had RAF jets flying overhead (air), a Scots Guards Drum and Pipe Band with soldiers marching past (earth), and the sun came out (fire). What more could we ask for?

We found ourselves on the river bank near the discharge from the old water works; and threw a quartz crystal (not by chance had this been given a really good cleansing the night before) into the river, along with a feather we had picked up along the way. We then climbed up onto an old bridge and walked to the centre and darkest side, to finally throw the 30cc Rescue Remedy tablets, another friend had given us, into the water. Note: whilst RR is often used in liquid and cream form  for humans and animals, some pharmacists provide a stronger tablet version, which can be used to help heal places.

At last, we felt our task was finished.

As I said at the beginning of this little story, I believe we had gathered in York for a variety of reasons, and our experiences were just a few amongst many which were taking place ‘behind the scenes’ so to speak. But then that’s always the way things seem to happen when you simply let them be.